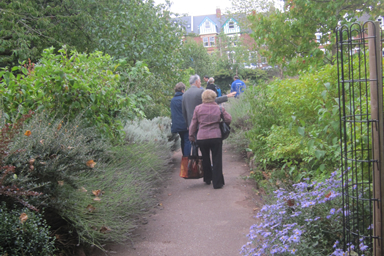 Michael Parrott, Publicity Officer and Vice-Chair Elect of Newtown Community Association welcomed guests to the Belmont Sensory Garden in Belmont Park, Exeter which is believed to be the oldest sensory garden in the UK if not the world.

The Right Worshipful the Lord Mayor of Exeter, Councillor Rachel Lyons revealed a newly commissioned sign for the garden which opened in 1939. The garden was the  idea of Exeter resident Daniel Manning who was a keen gardener and became the Devon Horticultural Superintendent. During a visit to a park in London Daniel noted with considerable interest the pleasure that a blind lady took in handling and smelling an Artemisia plant.  This inspired him to come up the idea of a public garden for the blind.

Devon in Sight’s Operations Manager Grahame Flynn said,” We would like to congratulate the Newtown Community Association on the project to enhance the sensory garden and to promote the garden’s national and world historic importance”.